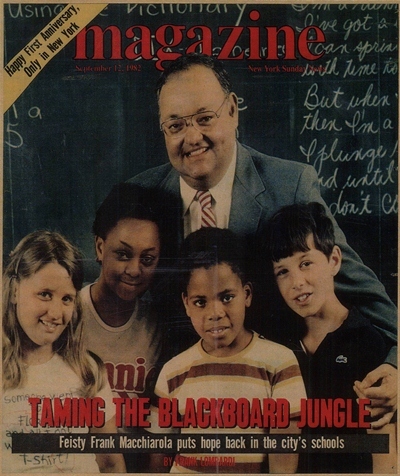 This exhibit can be navigated by clicking through the exhibit directory on the right. Click on photos to zoom in.

Dr. Macchiarola was the New York City Public Schools Chancellor from 1978 -1983.  His tenure as Chancellor was widely considered to be successful in spite of the deep problems plaging the city schools during the period. His appointment by Mayor Ed Koch was initially opposed by Albert Shanker, the President of the United Federation of Teachers.  By 1983 however, when Dr. Macchiarola resigned to accept a position with New York City Partnership, Mr. Shanker had come to respect the Chancellor's efforts and urged him not to resign.

Dennis Walcott, the Schools Chancellor at the time of Dr. Macchiarola's death praised him as being "instrumental in redefining the role of the principal as the key leader of a school community".  Mayor Ed Koch referred to him as the "finest schools chancellor New York City ever had".  Mayor Bloomberg also credits Dr. Macchiarola's school reforms as having helped "set the stage for the accomplishments of his own administration".

The collection of documents Dr. Macchiarola left behind is extensive.  Many of the 35 volumes of speeches and 26 volumes of scrapbooks have yet to be explored and researched.  The library staff have created this exhibit to highlight some examples of the documents created during one of the more challenging and important epochs of Dr. Macchiarola's career.